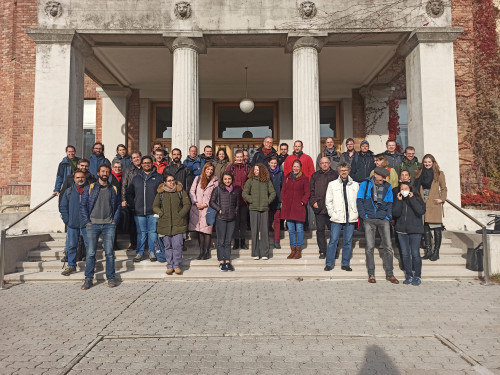 SHOWCASE partners met up for the first annual project meeting

Project members and representatives of the SHOWCASE experimental biodiversity areas (EBAs) met up between 15 and 17 November 2021. The four-day meeting was marked by insightful presentations, vivid discussions and an overview of the project’s developments and future initiatives. The 2021 SHOWCASE annual general meeting was hosted by project partners from Universität für Bodenkultur Wien (BOKU) in Vienna, Austria. A special hybrid conference environment provided for the meeting proved to be extremely efficient in facilitating dialogues and discussions between partners on site and online.

Following a welcome address by project coordinator Prof. David Keijn of Wageningen University and Research (WUR) and a brief overview of the agenda, the first day of the meeting kickstarted with acknowledging the fact that since SHOWCASE began at the end of 2020, the first annual meeting of the project is also the first time that most partners see each other in person, despite they have already worked together for a full year.

The first day of the annual meeting included a plenary session presenting the progress of all the project teams. Partners presented an overview of the work that has been conducted since the beginning of the project and also outlined the next steps of their research.

The second day comprised of a number of panels focused on EBA interventions, the development of biodiversity indicators, as well as breakout groups on discrete choice experiments in farming, communication of biodiversity, evidence base for synergies between agriculture and biodiversity, and farmers’ preferences for the mix of private and public incentives, biodiversity in business.

The vivid discussions proceeded on the third day of the meeting, which featured a number of breakout discussions on qualitative interviews of farmers, development of a citizen science application for counting pollinator visits to plants, SHOWCASE narrative which aims to provide a great new discourse to biodiversity-friendly farming, and on biodiversity and large carnivores in marginal agricultural areas.

A special breakout session of the SHOWCASE EBAs took place on 14 November.

After the three days of intensive discussions and collaboration, the SHOWCASE team is looking forward to a productive year of research on biodiversity-friendly farming!