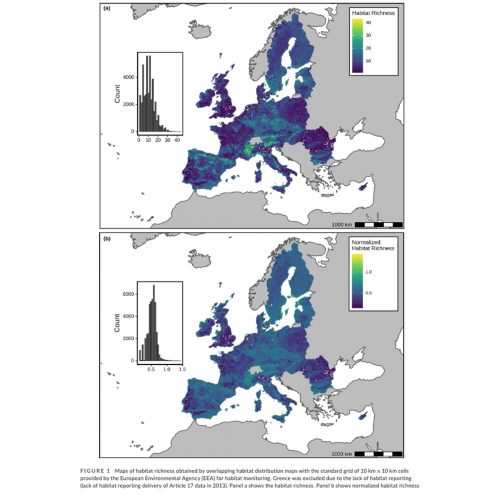 When we talk about habitat richness, what variables affect the diversity of ecosystem types and which of those is most important? How do interactions among these variables influence habitat richness? An article titled “Diversity of European habitat types is correlated with geography more than climate and human pressure” was published in the journal of Ecology and Evolution explores precisely such questions. Co-written by Dr Duccio Rocchini from the SHOWCASE team, the article explores the challenges to traditional conservation approaches of dynamic ecosystems caused by changing climates and increasing anthropogenic pressure.

The habitat (or ecosystem) approach for conservation has been highlighted by the International Union for Conservation of Nature (IUCN) as a necessary stepping stone for conservation. Habitat richness reflects the state of environmental conditions and can serve as an explanatory variable for modelling the distributions and abundances of species or communities.

Studies in the past have analysed the factors influencing the spatial variation in species richness, which is usually correlated with variables such as climate, latitude, topographic heterogeneity, and anthropogenic pressure. The standard hypothesis is that species richness in equal sized sample sites should increase with the total amount of habitat. In the same way, the number of species inhabiting a region correlates with the number of vegetation types. Despite this, the relative importance of habitat amount and its spatial configuration (e.g. fragmentation, connectivity, perimeter/area ratio) is still debatable.

Ultimately, the researchers’ analysis highlights the positive and monotonic relationship between habitat richness and the richness of species with conservation concern. The research shows that a high number of habitats support a high number of species and vice versa, which confirms that habitat diversity at continental scales can be used as a pragmatic proxy for species richness – a useful tool to assess the status of biodiversity conservation.